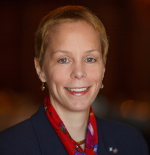 The music of Augusta Read Thomas (b. 1964) is majestic, it is elegant, it is lyrical, it is “boldly considered music that celebrates the sound of the instruments and reaffirms the vitality of orchestral music” (Philadelphia Inquirer). Her deeply personal music is guided by her particular sense of musical form, rhythm, timbre, and harmony. But given this individuality, her music is affected by history — in Thomas’s words, “Old music deserves new music and new music needs old music.” For Thomas, this means cherishing her place within the musical tradition and giving credit to those who have forged the musical paths she follows and from which she innovates. “You can hear the perfumes of my metaphorical grandparents,” Thomas states. “There is a wonderful tradition that I adore, I understand, and care about, but I have my two feet facing forward.” Thomas’s vision toward the future, her understanding of the present, and her respect for the past is evident in her art. Most striking in her music, however, is its exquisite humanity and poetry of the soul. The notion that music takes over where words cease is hardly more true than in her musical voice.

Born in Glen Cove, New York, Thomas was appointed University Professor of Composition at the University of Chicago in 2011. University Professors are selected for internationally recognized eminence in their fields as well as for their potential for high impact across the University. Thomas will become the 16th person ever to hold a University Professorship, and the fifth currently at the University. Additionally, she was the Mead Composer-in-Residence with the Chicago Symphony Orchestra (CSO) from May 1997 through June 2006, a residency that culminated in the premiere of Astral Canticle — one of two finalists for the 2007 Pulitzer Prize in Music. During her residency with the CSO, under the direction of Daniel Barenboim, Thomas not only premiered nine commissioned works, but also founded, along with Cliff Colnot, and curated the MusicNOW series. In addition to Barenboim, Thomas’s music has been championed by other leading conductors including Pierre Boulez, Esa-Pekka Salonen, Oliver Knussen, Seiji Ozawa, Mstislav Rostropovich, Leonard Slatkin, David Robertson, Christoph Eschenbach, Ludovic Morlot, and Xian Zhang. Her music has been commissioned by leading ensembles and organizations around the world including: Love Songs (Chanticleer); Chanting to Paradise (NDR [German Radio] Orchestra);Song in Sorrow (The Cleveland Orchestra); Orbital Beacons, Aurora, In My Sky at Twilight, Ceremonial, Carillon Sky, Words of the Sea, Trainwork, Tangle, and Astral Canticle(Chicago Symphony Orchestra); Prayer Bells (Pittsburgh Symphony); Bells Ring Summer (La Jolla Chamber Music Society); Galaxy Dances and Cello Concerto (National Symphony); Violin Concerto (Radio France and the BBC Orchestra); Helios Choros I (Dallas Symphony); Helios Choros II (London and Boston Symphony Orchestras); Helios Choros III (Orchestre de Paris);Pulsar (BBC); Terpsichore’s Dream (Utah Symphony); Canticle Weaving (Los Angeles Philharmonic); and Cantos for Slava (ASCAP Foundation).

From 1993 to 2001, Thomas was an assistant professor, then associate professor of composition at the Eastman School of Music, and from 2001 until 2006 she was the Wyatt Professor of Music at Northwestern University. In 2007-2008, Thomas was a Visiting Scholar in the Department of Music in the Division of the Humanities at the University of Chicago. Frequently, Thomas undertakes short-term residencies in colleges, universities, and festivals across the United States and in Europe.

Thomas studied composition with Jacob Druckman at Yale University, with Alan Stout and Bill Karlins at Northwestern University, and at the Royal Academy of Music in London. She was a Junior Fellow in the Society of Fellows at Harvard University (1991–94) and a Bunting Fellow at Radcliffe College (1990–91), and often teaches composition at Tanglewood. Thomas has also been on the Board of Directors of the American Music Center since 2000, as well as on the boards and advisory boards of several chamber music groups.

In addition to the numerous commercial recordings of her music available on major record labels, Thomas has released five of her own albums independently.