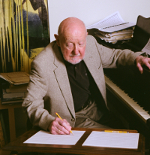 Charles Bestor received his musical training under Paul Hindemith, Vincent Persichetti and Peter Mennin at the Juilliard School of Music, Yale University and privately with the electronic composer Vladimir Ussachevsky.

Dr. Bestor is a Fellow of the MacDowell Colony, Yaddo, the Ragdale Foundation, the Virginia Center for the Creative Arts and the Tyrone Guthrie Centre, Ireland. He is listed in Marquis’ Who’s Who in America and Who’s Who in the World, the International Who’s Who in Music, the Dictionary of International Biography, Joseph Machlis’ Introduction to Contemporary Music and a number of professional who’s whos.

Dr. Bestor is currently Professor of Music Composition and Theory at the University of Massachusetts.