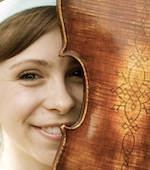 Christine Hedden creates a sound that draws upon many wells: traditional, classical, and contemporary. As a performer and a composer, she is exploring the fiddle in a variety of contexts from free jazz and improvisation to electronic music, contemporary classical music and of course, in the great rivers of tradition.

Hailing from the highlands of western Connecticut, Christine began her musical adventures as a violist, staying up late to play in New England slow-jam sessions with her Father. Her compositional pursuits originated from little songs composed in childhood that later became small works written for the instrumentation of family and friends. She has always been in love in Irish traditional music, first encountering the melodies and the rhythms on the kitchen radio, and then in the eclectic repertoire of New England folk music.

In 2011, Christine had the opportunity to study abroad at the University of Limerick through the Vira Heinz Scholarship Program for Women in Global Leadership. There, she participated in the Blás International Academy of Irish Traditional Music and Dance at the Irish World Academy. In 2012, she happily returned to Ireland to attend Scoil Samhradh Willie Clancy. In the States, she continues to immerse herself in Irish traditional music, playing regularly at sessions and alongside local fiddle players.

Christine is a graduate of Carnegie Mellon University Class of 2013 and holds B.A. in Music Composition and a B.A. in Viola Performance. Currently, she is pursuing a master’s degree in music composition from the University of Michigan, where she studies with Evan Chambers and Kristin Kuster. Her former teachers include composer Nancy Galbraith and violist David Harding.

Christine is a member of Sigma Alpha Iota Music Fraternity for Women, Mortar Board Honor Society, and BMI.