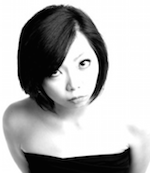 Diana’s musical interest is currently directed at exploring performance interactivity. She is interested in writing music that includes the physical aspects of music making and her music tends to be characterized by interruptive oppositions between surface activities and passivity with a renewed passion for the use of electronics.
Diana’s works have been performed in venues and festivals as varied as the Manifeste Festival, the Royaumont Voix Nouvelles, the Acanthes Festival, and the June in Buffalo Festival among many others. It has also been broadcast recently on the BBC Radio 3 and France Musique.

In addition, she has worked with notable musicians such as the late James Avery, Magnus Andersson, Tony Arnold, NEO Norrbotten, Cikada Ensemble, Ensemble Court Circuit, Arditti Quartet and many more. An alumnus of the National University of Singapore’s YST Conservatory of Music, She recently finished my doctoral studies at the University at Buffalo under the tutelage of David Felder and has spent the last two years at IRCAM for the Cursus 1 and 2 (2011-2013) program.

Diana’s move from Buffalo to Paris came with the opportunity to contribute to her newfound community as the composer-in-residence (2012-2013) at the Conservatoire D’ivry sur Seine in partnership with La Muse en Circuit. The end of her residency in 2013 was marked with her first portrait concert as part of the Festival Extension, with the kind sponsorship of l’ARIAM and l’ADIAM94.

This upcoming concert season consists of numerous new commissions and collaborations that is taking her from Copenhagen, to Amsterdam, to Seoul, and also back to my hometown, Singapore.