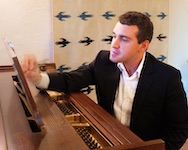 Dylan Schneider has emerged as a leading voice among today’s generation of composers. His work, praised for its innovative structure and dramatic flair, has drawn an international audience and has been performed by Grammy-Award-winning ensembles such as Eighth Blackbird, the Pacifica String Quartet, and the Saint Paul Chamber Orchestra. Schneider’s music pioneers new frontiers in performance with a sense of lyricism and play.

By the age of 21, Schneider had attended the premiere of his first opera, A VERY OLD MAN WITH ENORMOUS WINGS, his own adaptation of a story by Gabriel García Márquez. The opera invokes the dreamlike lyricism of Márquez’s hallmark genre of magical realism while confronting the audience with an exposé of human greed and corruption.

In 2013, Schneider’s second opera, STRIP-TEASE, received its premiere as part of the inaugural season of the University of Chicago’s Logan Center for the Arts. The opera is the composer’s own adaptation of a play of the same title by renowned Polish dramatist Sławomir Mrożek, whose works written during the height of Soviet power offer a critique of life under an oppressive regime, often disguised in surreal circumstances.

In December 2019, the Cassatt Quartet will premiere Schneider’s new String Quartet at the Clark Art Institute in Williamstown, MA. Composed in response to artwork at the Clark, the piece follows Degas’ iconic ballerina (Little Dancer of Fourteen Years) on a whirlwind tour of the museum’s collection, architecture, and grounds. The Clark premiere precedes a second collaboration with the Cassatt Quartet in 2020.

Schneider received his B.A. in music and English from Amherst College and his Ph.D. in music from the University of Chicago.

A distinguished pianist, Schneider is often heard in performance of repertoire from across the centuries as well as his own work and the music of his contemporaries.