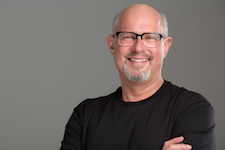 Edward Jacobs began playing violin at age 8, but abandoned that at age 11—upon hearing a friend’s jazz quartet—in favor of the saxophone. Undergraduate work at the University of Massachusetts, Amherst in jazz performance, and then in composition (Salvatore Macchia, Robert Stern) was followed by graduate study at the University of California, Berkeley in composition (Andrew Imbrie, Olly Wilson, Gerard Grisey); and a doctorate at Columbia University (Chou Wen-Chung, Mario Davidovsky, Marty Boykan, George Edwards).

Jacobs’ music is written for forces ranging from soloists to chamber ensembles, orchestra, concerto, and choral. In 2001 Jacobs began to work with electronic media, and has since written pieces for fixed media with clarinet (A Function of Memory, Beauty Shop), with cello (al momento), piano (echoes, shadows), and for dancers (dis/Connect) and, most recently with voice (The Line Between).

His music is published by C. F. Peters Corp., NY, ACA, and APNM. Recordings by Chris Grymes and Xak Bjerken of Aural History (clarinet & piano), and A Function of Memory are available on Open G Records (A Function of Memory); Passed Time (brass quintet) is heard on Meridian Arts Ensemble’s Seven Kings, Innova Records (No. 943); Release is appears on Ablaze Records Orchestra Masters series; and The Line Between (for soprano and fixed media, with poetry of E. E. Cummings), al momento, Palladium (song on poetry of James Brasfield), and Addressing Wonder (vla, vc, pno) are forthcoming on Open G Records in 2019.

Jacobs work as a composer has been recognized by a Guggenheim Fellowship, and a Charles Ives Award of the American Academy of Arts & Letters. The Academy’s citation reads “Jacobs’s music masters the ‘virtual’ and ‘real’ sound habitats and embeds them into a unified and consistent single space with grace, broad orchestral imagination and expressivity. Jacobs’s music is immediately engaging, attractive and intellectually demanding.”

Jacobs began teaching at East Carolina University in 1998, where he has received three Research/Creative Activity Grants, a Teacher-Scholar Award, and has been Robert L. Jones Distinguished Professor of Music since 2014. He is the founding director of NC NEWMUSIC INITIATIVE, begun in 2001; and also created the “Young Composers Project,” a collaboration with general music teachers in the Pitt County (NC) Public Schools, which seeks to make the creation of music a fundamental part of our childrens’ education.

For more information, and to listen to Jacobs’ music: www.edwardjacobs.org.