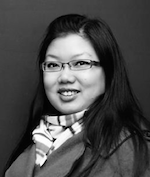 Emily Koh is an award-winning young composer of contemporary classical music based in Boston MA, and a native of Singapore. Described as ‘the future of composing’ (The Straits Times, Singapore) and ‘a talent with great potential’ (An Tuireann Arts Center, Scotland), Emily’s works have received wide press acclaim, and have been described as “beautifully eerie” (New York Times), and “subtley spicy” (Baltimore Sun), and “piquant to the senses” (The Straits Times, Singapore).

Besides composing, Emily is an avid music educator, acoustic/electric bassist and presenter. She currently teaches musicianship at Brandeis University (Waltham MA), and has taught at the Peabody Conservatory of Music (Baltimore MD), Saint Loyola Ignatius Academy (Baltimore MD) and Temasek Junior College (Singapore). Emily was one of four judges in the Music Composition category at the 2012 and 2011 National Parent-Teacher Association’s annual “Reflections” competition. As a bassist, she regularly performs contemporary solo and chamber music, as well as experimental and improvised repertoire for the double bass and electric bass. She is the principal bassist of the New England Philharmonic for the orchestra’s 2014/15 season, and is a founding member of d’bassists – the only double bass ensemble in Singapore, and the experimental and improv ensemble The Gentlemen’s Very (Very) High Art Society of South Waltham.