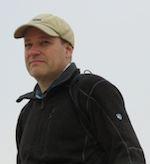 Eric Sawyer’s operas The Our American Cousin, The Garden of Martyrs, and The Scarlet Professor have received New England premieres in the past decade. A new musical theater work, My Evil Twin, was heard in preview performances this summer. Sawyer’s musical vocabulary brings together traditions in American music, and a number of larger works spring from American history and literature.  His Fantasy Concerto: Concord Conversations, a triple concerto based on the American Transcendentalists, was performed in recently by Boston Modern Orchestra Project and the Claremont Trio. A recipient of the Joseph Bearns Prize and an award from the American Academy of Arts and Letters, Sawyer teaches at Amherst College.  His music is available on the Albany Records and BMOP/sound labels.