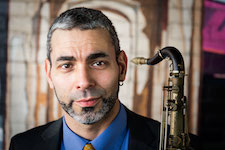 A native of São Paulo, Brazil, Dr. Felipe Salles has served as an Associate Professor at of Jazz and African-American Music Studies at the University of Massachusetts Amherst since 2010. An active musician in the US since 1995, he has worked and recorded with prominent jazz artists, including Randy Brecker, David Liebman, Lionel Loueke, Jerry Bergonzi, Chico Pinheiro, Jovino Santos Neto, Oscar Stagnaro, Duduka Da Fonseca, Maucha Adnet, Tony Lujan, Luciana Souza, and Bob Moses. He has toured extensively in Europe, North and South America, India and Australia, as a sideman and as a leader of his own group.

Salles is a 2018 Guggenheim Foundation Composition Fellow, a 2015 NALAC Fund for the Arts Grant winner, a 2009-2010 winner of the French American Jazz Exchange Grant, and a 2005-2006 winner of the Chamber Music America New Works: Creation and Presentation Grant Program, grants sponsored by The Doris Duke Charitable Foundation. He was awarded First Place in the 2001 Concurso SGAE de Jazz “TETE MONTOLIU”, 2001, with his composition The Return of The Chromo Sapiens.

Salles has released seven critically acclaimed recordings as a leader. Departure (Tapestry, 2012) received 4-stars from DownBeat and a place on their best albums of the year list in 2013. They noted that Salles is adept at “crafting pieces that juggle intriguing complexity with buoyant rhythms and lush colors.” JazzTimes Magazine noted that “Felipe Salles blends the visceral and the cerebral on his fascinating fifth album, infusing classical modernist strains with the buoyant rhythms of his Brazilian homeland.” Ugandan Suite (Tapestry, 2014) also earned a place on DownBeat’s best albums of the year list in 2014 and was praised by jazz guitarist Lionel Loueke: “This is one of the best progressive works I have heard in a long time. What a great blend of classical, African and Jazz music.” Varanda (Tapestry, 2017) with the Brazilian jazz collective titled The Reunion Project, also earned critical acclaim including 4.5 stars in DownBeat Magazine.

The Lullaby Project and Other Works for Large Jazz Ensemble is Salles’ first large jazz ensemble recording, and was composed for and recorded by his own Interconnections Ensemble.
Dr. Salles is a D’Addario Woodwinds Select Reeds Artist/Clinician and an Andreas Eastman Saxophones Artist/Clinician. He currently leads both The Felipe Salles Group and The Felipe Salles’ Interconnections Ensemble, and works as a member of the New World Jazz Composers Octet, Kyle Saulnier’s Awakening Orchestra, Alex Alvear’s Mango Blue and Gonzalo Grau’s (Grammy Nominated) La Clave Secreta.