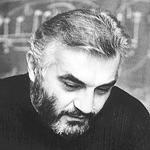 Franco Donatoni (1927-2000) is among the most prominent Italian composers of his generation, along with his contemporaries Berio and Nono. He studied with Ettore Desderi, Lno Liviabella, and in Rome with Pizzetti. A noted pedagogue, he has taught at the Bologna Conservatory, the Verdi conservatories of Turin and Milan, and from 1960 at Accademia Musicale Chigiana in Siena. Donatoni’s most prominent early influence was Bartók, along with his countryman Petrassi. To them one might trace the roots ofDonatoni’s distinctively vibrant rhythmic style and concern for instrumental color.