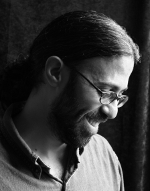 Manuel Sosa was born in Caracas, Venezuela, and started his early musical studies on the Cuatro (venezuelan string instrument), which were eventually complemented by violin and solfège studies at the José Ángel Lamas National Conservatory.

At age 16, and having decided to pursue music instead of architecture, he moved to the United States, initially settling in Philadelphia, where he studied music theory and composition with Joseph Castaldo, at the University of the Arts. In 1988, he transferred to the Juilliard School, in New York City, where he studied composition with Stephen Albert, Robert Beaser, and David Diamond, receiving his BM, MM, and DMA degrees from this institution. He has also studied composition with Jacob Druckman, Earl Kim, and Bruce Saylor; composition seminars with Mark Andrè, Beat Furrer, Adriana Hölszky, Helmut Lachenmann; harmony with Mary Anthony Cox; Afro-Caribbean percussion with Jerry González; composition, counterpoint, analysis, and conducting with his mentor, Jacques-Louis Monod.

He has presented scholarly papers, on art and music in Latin America, in conferences in Austria (Mitersill), England (York), Germany (Darmstadt), and Venezuela (Caracas), some of which have been published in journals in Austria and Germany.

He is chair of the performing arts committee of the Venezuelan-American Endowment for the Arts, and has also been treasurer and executive secretary of the Guild of Composers, Inc., as well as a music editor for the Milken Archive of American Jewish Music. He is chair of the ear-training department, and a member of the composition faculty of the Pre-College Division of the Juilliard School.