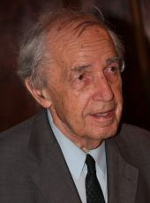 A living classic. Ever since the 1950’s, composers around the world have followed with curiosity what he was writing, to see if they could adapt his ideas in their own music or to reject them in their search for an idiom they could call their own. In 1957, György Kurtág arrived in Paris with the goal to compose something he could show to Boulez (in the end, he left without a work worthy of being presented). The music the French composer has written ever since the late 1940’s was a conscious act of rebellion against tradition as represented by Schönberg or Stravinsky but also his teacher, Messiaen, whose influence has nevertheless left its mark on Boulez’s music.

In his compositions but also in his writings, Boulez was initially an angry and rebellious young man (see his scathing obituary Schönberg est mort). With the passage of time as he became an established figure, with France inviting him back to found IRCAM and the Ensemble Intercontemporain and his career as a conductor also taking off, there has probably been less to rebel against and Boulez has mellowed and broadened his horizons to conduct a wide range of repertoire including Bruckner and Mahler.

Boulez has also been a highly influential teacher, beginning in Darmstadt in the 1950s and continuing right up to the present, primarily in Lucerne where he passes on his immense knowledge to fledgling conductors at the Festival Academy.

New compositions emerge and become straight away an integral part of the repertoire. It is as if orchestras and ensembles could not wait for a new work to leave his desk: after the premiere, a Boulez novelty is taken up – snatched up – by performing bodies all over the world. Boulez – a living classic.