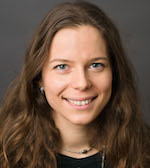 Born in Togliatti, an industrial city on the Volga River in Russia, Polina Nazaykinskaya (b.1987) studied piano, violin and flute as a child, and as a teenager at the Moscow Tchaikovsky Conservatory she concentrated on violin and composition. She came to the U.S. to attend the Yale School of Music, where she completed a master’s degree in composition and theory and artist diploma in composition, working with Christopher Theofanidis and Ezra Laderman. She is now is pursuing a doctorate degree in composition at the Graduate Center, City University of New York, studying with Tania León. She has won numerous awards including the Charles Ives Scholarship at The American Academy of Arts and Letters, Paul and Daisy Soros Fellowship and has garnered performances by ensembles including the Minnesota Orchestra, the U.S. Army Orchestra, the Russian National Orchestra, Pittsburgh Symphony Orchestra, the Hermitage Orchestra and Chorus, the Yale Philharmonia Orchestra, the Youth Symphony Orchestra of Russia, the Omsk Philharmonic Orchestra, Metropolitan Symphony Orchestra, the St. Olaf Philharmonia and the Juventas New Music Ensemble, where her chamber opera, The Magic Mirror, drew considerable attention for its elegance and rich, intricate score.