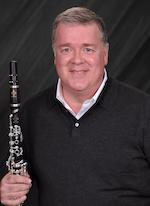 In addition to having taught a large private studio of clarinetists in CT, Anthony is on the faculty of The Juilliard School’s Pre-College Programs, Amherst College, performed for Young Audiences of New York and New Jersey and has been consultant to The Morgan Library and Museum’s Family Concert Series. Mr. Brackett has been an adjudicator and clinician for the Connecticut Music Educators Association, served as President, Orchestra Manager and adjudicator for the New England Music Festival Association, and Manager of NAfME’s National Honors Orchestra.

Tony and his family live in Amherst, MA where he teaches private clarinet students and writes arrangements for clarinet ensembles available at www.AMBClarinet.com.