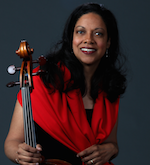 Cellist Astrid Schween is an internationally recognized soloist and chamber artist. As a long-time member of the Lark Quartet, she performed in some of the world’s most prestigious venues, recorded numerous CDs, and received many honors including the Naumburg Chamber Music Award and the Gold Medal at Russia’s Shostakovich Competition. While still a teenager, she made her debut as soloist with the New York Philharmonic under the direction of Zubin Mehta and went on to receive bachelors and masters degrees at The Juilliard School, where she was twice awarded the Juilliard Cello Prize. Her teachers there included Harvey Shapiro, Leonard Rose, Channing Robbins and Ardyth Alton. She also studied with Bernard Greenhouse, Dr. H.T. Ma, Eugene Moye and in London with Jacqueline Du Pré. She participated in the Marlboro Music Festival and the William Pleeth Cello Master Classes at the Britten-Pears School in Aldeburgh. Ms. Schween currently serves as cello professor at the University of Massachusetts Amherst, and is on the faculty of the Hartt School of Music, Mount Holyoke College, and at Interlochen. She is an occasional speaker and panelist for organizations such as Chamber Music America and has conducted master classes at numerous schools including Juilliard, the Curtis Institute, the Hartt School, and Dartmouth College. A frequent guest artist with the Boston and Memphis Chamber Music Societies, she is also a member of the Boston Trio, an ensemble-in-residence at the New England Conservatory. She performs regularly in recital with pianists Randall Hodgkinson and Michael Gurt and has served as juror for the Fischoff, Sphinx, and Concert Artist Guild competitions. In September 2016, Astrid Schween will succeed Joel Krosnick as cellist of the Juilliard String Quartet and join the faculty at The Juilliard School.