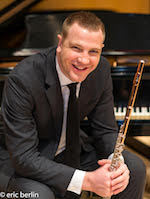 A strong advocate for the musical arts, Cobus is an avid soloist, chamber musician and pedagogue who is affiliated with the Haynes flute company as an Ambassador Clinician and Artist. Cobus also was recently appointed as the Assistant Professor of Flute at the University of Massachusetts Amherst. Current creative projects include #WeBringFlowers which is set of socially conscious commissions that deal with societal violence in a non political manner and a recording for the Naxos label of the complete flute oeuvre by French composer, Jacques Castérède.

As an international soloist and chamber musician, Cobus has performed with orchestras in Russia, South Africa and the United States and on concert series in Australia, Taiwan, Japan, Germany and France. Cobus has been a prize winner at over a dozen competitions which include the 1st UNISA Southern African National Competition for Woodwinds and Brass, the Byron Hester Competition, the Myrna Brown Competition and the SAMRO International Scholarship Competition.

In addition to being the principal flute for the Boulder Chamber Orchestra, Cobus is also the flutist for the Antero Winds, a professional woodwind quintet that has been prizewinners at both the Plowman and Fischoff chamber music competitions. Cobus received his Master of Music and Doctor of Musical Arts from the University of Colorado at Boulder and a Bachelor of Music from the University of Pretoria. His principal teachers include John Hinch and Christina Jennings.