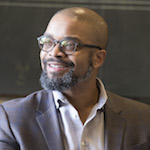 Darryl Harper has had a thirty-five-year career in music performance, composition, teaching, and educational leadership. He has performed more than 300 concerts throughout the world. His credits include dates with Dee Dee Bridgewater, Roscoe Mitchell, Dave Holland, Uri Caine, and a two-year stint with violinist and MacArthur Fellow Regina Carter. He has led the jazz ensemble The Onus since 1996. As a composer, Harper has published and recorded more than two dozen works. He has co-written a score for the documentary film Herskovits: At the Heart of Blackness, which won the John O’Connor Film Award from the American Historical Society, as well as “Best Documentary” prizes from the Martha’s Vineyard African American Film Festival and the Black Hollywood Film Festival. Harper is director of the Amherst College’s Center for Humanistic Inquiry. He teaches courses at Amherst in jazz history, improvisation, the live music experience, and embodied practice.