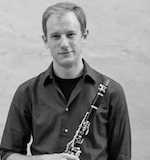 Clarinetist and bass clarinetist David Perry began his career in a time when classical music in America was entering a very unique stage of its development as an art form. Being a musician in 21st-century America means working in a field whose roots are often seen being pulled out of schools, and whose flagship organizations have faced unprecedented operational challenges, even coming near to collapse. Amidst all of this very real adversity, David has consistently shown himself as one with great creativity, pragmatism, and a tireless devotion to his art form and all that it has to offer to people. David has an exceptionally strong passion for the connective power of music, for its potential to bring people together in community in a time when our attention is often divided between an ever-increasing number of purposes. An adept thinker and speaker about music, David makes it a special point at each performance to find the best words to help the audience to feel a personal connection with himself, and in doing so, to feel a personal connection to the music.

David’s flexibility as a musician allows him to find himself at home in any performance setting and ensemble. David had the opportunity to enhance his orchestral musicianship as a recipient of the New Horizons Fellowship to the Aspen Music Festival and School. As a repeated guest musician with the Toronto Symphony Orchestra, David has performed under the batons of Peter Oundjian and Jukka-Pekka Saraste. Currently, David is a regular guest member of the New Haven and Hartford Symphony Orchestras, and maintains an active freelance career in New England. Recently, he has been heard in a great variety of settings, including the Yale Cabaret (Radio Hour), the Berkshire Theater Festival (La Traviata), and at the Norfolk Contemporary Music Workshop.

With a strong commitment to the role of any artist as a source of community engagement and service, David continues to make a strong mark as a music educator on students as young as 5, and as old as 70. He first truly discovered his passion and skill as a teacher while working with Yale University’s Music in Schools Initiative. Through this channel, David teaches in many of the public schools in New Haven, Connecticut, where he is also the founder of The Second Movement, an ensemble and concert series dedicated to showcasing students alongside professional performers. A teaching artist faculty member of Bravo Waterbury!, in Waterbury, CT, David’s educational philosophy also includes the conviction that music has the potential to act as a vehicle for social change and service. Inspired by the world-renowned El Sistema program in Venezuela, Bravo is an institution that brings musical opportunities to young children with an eye on impacting their future through the skills of teamwork and creativity that are necessary to every musical achievement. In 2014, David also joined the faculty of Mount Holyoke College as the instructor of clarinet.

David holds a Bachelor of Music degree from the University of Wyoming, a Master of Music from the University of Toronto, the city in which he also received an Artist Diploma from the Glenn Gould School at the Royal Conservatory. Most recently, David completed his Artist Diploma at the Yale School of Music. David’s primary teachers have been Stephanie Zelnick, Joaquin Valdepeñas, Burt Hara, and David Shifrin. Outside of music, David enjoys yoga, running, and experimenting with a great variety of coffee makers. David is also an avid reader, and is currently reading Joseph Heller’s hilarious and telling novel, Catch-22, as well as Italo Calvino’s playful If on a winter’s night a traveler.