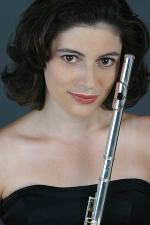 Hailed as a “superb flutist” (New York Times), Erin Lesser has performed as soloist and chamber musician throughout Canada, the USA, Europe, Asia and South America. She is a member of Argento Chamber Ensemble, Due East, Scarborough Trio and the Wet Ink Ensemble and was recently appointed as flutist for Alarm Will Sound. Erin spent two years in a fellowship with The Academy—A Program of Carnegie Hall, The Juilliard School, and The Weill Music Institute, and continues to perform with Ensemble ACJW as an alumni member. Beginning in the fall of 2011, Erin will be Assistant Professor of Flute at Lawrence University in Appleton, WI. Erin is a Pearl Flute Performing Artist.

Ms. Lesser is actively involved in the contemporary music world, having worked closely with composers such as Pierre Boulez, George Crumb, Helmut Lachenmann, Gabriela Lena Frank, Mario Davidovsky, Tristan Murail, Philippe Hurel and Beat Furrer. She has performed with many leading ensembles including Sō Percussion, Alarm Will Sound, Eighth Blackbird, Zankel Band, American Modern Ensemble and Sequitur. She has also commissioned many new works with her various ensembles, and presented lectures and demonstrations on flute techniques of the 21st Century.

Due East, Erin’s flute and percussion duo, won the 2008 National Flute Association Chamber Music Competition. Due East has been ensemble-in-residence at the Universidade de Campinas, Brazil, and the Yellow Barn Festival. The duo has performed at the Warsaw Crossdrumming Festival, Society of Electro Acoustic Music in the United States (SEAMUS) National Conference, Percussive Arts Society International Conventions (PASIC) in Texas, Tennessee and Ohio and New Music Festivals at Western Illinois University and University of North Carolina, Greensboro. Their first full length CD “Simultaneous Worlds” will be released in October 2010 on Albany Records.

As a member of the Scarborough Trio, Erin was a silver medalist at the 2004 Fischoff National Chamber Music Competition, and the 2006 Yellow Springs Chamber Music Competition. As first prizewinners in the Artists International Competition, the trio was presented in a New York Debut recital at Carnegie’s Weill Hall in 2003. They have toured the Midwest with Allied Concert Services, and have performed for the Dame Myra Hess Series in Chicago, the Kravis Center in West Palm Beach, Florida and the Focus Festival in North Carolina.