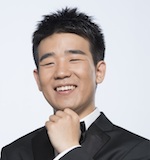 Hailing from Yantai, China, Mr. Sun received the Doctor of Musical Arts degree from The Juilliard School under the tutelage of Yoheved Kaplinsky and Stephen Hough. As the Iva Dee Hiatt Visiting Artist in Piano at Smith College, he presented Beethoven’s complete piano sonatas in chronological order in a series of eight recitals in the 2018–2019 season.