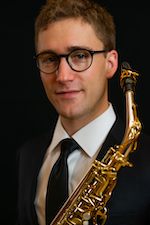 Classical saxophonist Jonathan Hulting-Cohen’s performances have been called “impressive” with “exceptional facility” (Schenectady Daily Gazette), and “fun to watch” (Oregon Arts Watch). He made his concerto debut with the Philadelphia Classical Symphony in 2011, since appearing with the Adrian (MI) and Sequoia (CA) Symphony Orchestras. First Prize Laureate (Winds) of the 2018 M-Prize Chamber Arts Competition, he has also performed with David Shifrin at Chamber Music Northwest and under David Robertson and John Adams at Carnegie Hall. His own projects include The Moanin’ Frogs sextet, the Admiral Launch Duo (harp), and a solo album, Timbre|ine, which will be released in 2020 on innova recordings. An advocate for new music, he has premiered over 60 solo and chamber works. Jonathan studied with Donald Sinta at the University of Michigan and is currently Assistant Professor of Saxophone at the University of Massachusetts Amherst. He is a Conn-Selmer and D’Addario Woodwinds Artist.