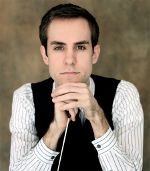 Massachusetts-based choral conductor Joseph Baldwin is the Iva Dee Hiatt Distinguished Assistant Director of Choral Activities and lecturer in music at Smith College. He is conductor of the Smith College Chorus and teaches courses in conducting, musicianship,
and studio voice.

From 2010 to 2012, Baldwin served as Founding Artistic Director & Conductor of the Community Chorus of Detroit. Under his artistic leadership, this regional chorus became known for its engaging, imaginative performances of a sophisticated, diverse repertoire. He has conducted a wide variety of collegiate ensembles at the University of Michigan, including the University Choir, Orpheus Singers, Arts Chorale, and Residential College
Singers; he has prepared choruses for performances under the baton of Leonard Slatkin, Jerry Blackstone, and Kenneth Kiesler. Baldwin is on the faculty of the Berkshire Choral Festival in Sheffield, MA, as a staff conductor, where he previously served as a conducting apprentice.

A baritone, Baldwin collaborates with some of the finest choral ensembles in the U.S. He currently sings with the Yale Choral Artists under Jeffrey Douma; he has been an ensemble soloist in the Beethoven Choral Fantasy with the Detroit Symphony Orchestra and the UMS Choral Union, conducted by Leonard Slatkin, and an ensemble member of the Great Lakes Festival Singers, in collaboration with composer Chen Yi and eighth blackbird. He has studied with Herbert Burtis, Karen Brunssen, and Daniel Washington.

A strong advocate for the choral arts at all levels, Baldwin is an active guest conductor and clinician; he has worked with choruses in the collegiate, secondary, and sacred settings in Michigan, Illinois, Georgia, and Massachusetts. Baldwin represents Massachusetts as the national board member for the National Collegiate Choral Organization and is a proud member of the American Choral Directors Association and Chorus America.

Baldwin’s primary research is focused on the thriving British choral scene, where he has traveled with Smith College grant to observe and interact with conductors and choristers. He has apprenticed with conducting luminaries such as Robert Page, Simon Carrington, Jane Glover, Kent Tritle, and Julian Wachner; he has completed conducting studies with Mallory Thompson, Victor Yampolsky, and Kenneth Kiesler.