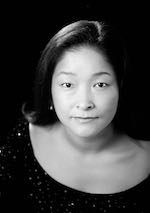 Soprano, Junko Watanabe, has performed widely in operas, oratorios, and recitals in the U.S. and in her native Japan. Her performances have been acclaimed for her “sweet, liquid tones” (Opera News), “ravishing soprano line” and a “tone that was steady, pure, and colorful all the way up into the empyrean above the staff” (Boston Globe). She has been featured as a soloist with the Boston Lyric Opera, Chorus pro Musica, Masterworks Chorale, Northwest Florida Symphony Orchestra, Osaka Philharmonic Orchestra, and the New England Bach Festival. As a participant in the Marlboro Music Festival from 2004 through 2007, she performed with Ken Noda, Martin Isepp, and Richard Goode. In recent years Ms. Watanabe has been featured as a soloist in Haydn’s “Lord Nelson Mass” and “The Creation,” Handel’s “Messiah,” Mozart’s “Requiem,” Poulenc’s “Gloria,” and Brahms’ “Requiem.” She has also performed various contemporary compositions, including Stephen Albert’s “To Wake the Dead,” Lester Trimble’s “Four Fragments from the Canterbury Tales,” Eric Sawyer’s “Curiosity” and “Vocalise,” the world premier of Paul Dedell’s “The Latitudes of Heaven,” and George Crumb’s “Madrigals, Book I.” Ms. Watanabe holds master’s degrees from Osaka College of Music and Longy School of Music. She was a finalist in the Oratorio Society of New York Solo Competition and winner of the NATS Competition Professional Division in Boston. Currently, she is on the faculty of Amherst College, Brattleboro Music Center, and Rivers School Conservatory.