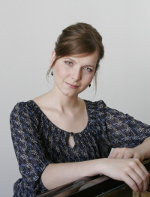 Praised by the distinguished German Süddeutsche Zeitung for her “Tastenzauberei” (“magic on the keys”), pianist Liza Stepanova debuted at the age of 11 on stage of the main Philharmonic Hall of her native Belarus. After moving to Germany two years later, she performed as a soloist with the Berliner Symphoniker at Philharmonic Hall in Berlin, at the Davos International Music Festival in Switzerland, and at the Berliner Begegnungen Festival under patronage of Claudio Abbado, as well as in various other venues in Germany, Austria, France and Sweden. In 2004 she made her first U.S. appearance with a solo recital on the AmerKlavier series at the DePaul University in Chicago. Since settling in New York City in 2005, she has appeared in Alice Tully, Steinway, Merkin and Carnegie Weill and Zankel Recital Halls, as well as live on WQXR New York, WFMT Chicago and WETA Washington fine arts stations. She has twice been a soloist with the Juilliard Orchestra, led by James DePreist in Lincoln Center’s Frederic P. Rose Hall and by Nicholas McGegan as the winner of Juilliard’s Mozart Concerto Competition. Highlights of the 2010-2011 season included a solo recital and masterclass at the University of Georgia, Tchaikovsky Concerto with the Southwest German Philharmonia in Germany, and a multimedia performance of Fanny Mendelssohn’s hour-long “The Year” cycle at the Mendelssohn Society in Berlin and New York.

An avid chamber musician, Ms. Stepanova is a member of the Lysander Piano Trio (with violinist Itamar Zorman and cellist Michael Katz) which won the Grand Prize at the 2011 Coleman, 1st Prize at the 2011 Arriaga and the Bronze Medal at the 2010 Fischoff Competition. The trio has given recitals at Alice Tully Hall and in the Terrace Theater at Kennedy Center in Washington DC. For more information, please visit www.lysandertrio.com. In recent summers, Ms. Stepanova has performed at the Sarasota, Music@Menlo and La Jolla SummerFest chamber music festivals. She recorded a CD with cellist Bong-Ihn Koh in Seoul, Korea sponsored by the Kuhmo Foundation, and a CD of clarinet sonatas for the Contemporary Record Society.

As a Lied accompanist, Ms. Stepanova worked with Wolfram Rieger in Berlin and Brian Zeger and Margo Garrett in New York and was invited by Dietrich Fischer-Dieskau to perform in two of his month-long workshops in Berlin and at the Hugo-Wolf-Tage Festival in Austria. She performed at the 2010 Cleveland Art Song Festival, the 2011 Castleton Festival and has been on the faculty of SongFest at Pepperdine University since 2011. At SongFest, she gave the World Premieres of song cycles by Libby Larsen and Tom Cipullo. Ms. Stepanova is a co-founder of SongFusion, a New York-based art song ensemble.

Among Ms. Stepanova’s special projects was the participation in a performance of the complete piano works by Mozart with two different recital programs and four piano concerti accompanied by the Mozart-Ensemble Berlin-Brandenburg on a tour in several German cities. In 2005, she premiered a new chamber arrangement of Chopin’s complete concerti and concert pieces for piano and orchestra, the length of two full recital programs, which she performed on consecutive evenings from memory. This project attracted particular attention and critical acclaim in the German and Austrian media, and she was subsequently invited on a 15-concert tour in the summer of 2007, including performances at the Schlosskonzerte Festival in Salzburg, Austria and other concerts in Berlin, Hamburg, Bamberg and Munich. Two of the concerts were fully broadcast together with an interview on Hamburg’s Via Classica radio station.

Liza Stepanova earned her master of music degree in piano performance from The Juilliard School in New York city under the guidance of Jerome Lowenthal and a bachelor of music degree from the Hanns Eisler Academy of Music in Berlin, where she was a student of Georg Sava. She performed in masterclasses for Daniel Barenboim, Alfred Brendel and Andras Schiff. In May 2012, Ms. Stepanova will graduate from the DMA program at Juilliard where she has been a C.V. Starr Doctoral Fellow, studying with Seymour Lipkin and Joseph Kalichstein. At Juilliard, she was awarded teaching fellowships in the Piano Minor, Music History and Literature and Materials of Music departments, and taught a Piano Topics class in the Fall of 2011. In the summer of 2010, she traveled to Germany on a grant from the Richard E. French fund to conduct research for her doctoral document on Felix and Fanny Mendelssohn. While in Berlin, she was invited to give a lecture-recital at the Mendelssohn Society.