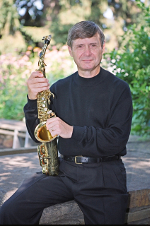 For more than forty years Lynn Klock has been an enthusiastic participant in new music for the saxophone.  He has had nearly 100 compositions written for and dedicated to him. He premiered works by Pulitzer Prize winning composers Lew Spratlan, and as part of a consortium, Gunther Schuller, Michael Colgrasss, and John Harbison. Other composers that have written for him include Yusef Lateef, Hsueh-Yung Shen, Marc-Antoio Consoli, Salvatore Macchia, Robert Stern, Brian Balmages, David Jex, Catherine McMichael, Samuel Hazo, and Clifton J. Noble Jr..

He has appeared as a soloist in Russia, Eastern Europe, South America, Great Britain, Singapore, British and American Virgin Islands, Canada, and throughout the United States.  He has the distinction of being the first saxophonist to be presented on the Warsaw Philharmonic Recital series in Warsaw, Poland, and the first saxophonist to tour with Musicians from Marlboro. Of his New York debut in Carnegie Recital Hall, Peter G. Davis of the New York Times wrote, “Mr. Klock performed in the most skillful fashion…What impressed one most was how expertly Mr. Klock demonstrated the versatility of the instrument, its potential for weaving smooth legato lines, its flexible dynamic range from delicately whispered pianissimo to forceful dramatic statements without any loss of tonal quality, and its virtuoso ability to clearly articulate even the most rapid figures….Lynn Klock assembled a program that had a considerable amount of expressive variety and sheer musical charm.” His recordings can be heard on the Albany, CRI, Open Loop, Gasparo, Mark, and Orion Labels.

As a Selmer Artist/Clinician, he has presented masterclasses at national and international conferences as well as educational institutions across the United States and overseas.  He has been Professor of Saxophone at the University of Massachusetts Amherst since 1980, and is the saxophonist and bass clarinetist in the Springfield Symphony Orchestra. Graduates of his program hold positions in the United States Military Bands in Washington D.C., and teaching positions in Great Britain and every level of education in the United States. A graduate of the University of Michigan and Interlochen Arts Academy, his teachers include Larry Teal, Donald Sinta, and Jack Kripl.