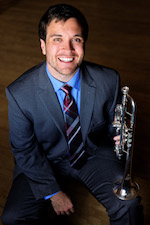 Currently residing in Somerset, Massachusetts, Steve is a doctoral candidate at the Eastman School of Music and the interim professor of trumpet at the University of Massachusetts Amherst.  He received his Master’s degree in Trumpet Performance also from the Eastman School, and a Bachelor’s degree in Trumpet Performance & Music Education from the University of Massachusetts Amherst.  An avid soloist, Steve has performed in competitions on the national and international level.  Most recently, Steve was awarded first place in the graduate solo division of the 2015 National Trumpet Competition, performing the fourth movement of Anthony Plog’s Concerto No. 2 for Trumpet & Orchestra.  In 2011, he was awarded second place in the undergraduate solo division, performing the first movement of John Stevens’ Sonata for Trumpet and Piano.  Steve has also been the recipient of three, consecutive scholarships from the International Trumpet Guild, from 2008-2010.  During the summer of 2011, Steve attended The Center for Advanced Musical Studies at Chosen Vale, a two-week long annual seminar, where he studied with some of the world’s most iconic trumpet soloists.

Steve maintains a private studio comprising both primary and secondary-level students in the greater-Boston area, as well as a collegiate studio through the University of Massachusetts.  Along with teaching privately, Steve also teaches publicly as an active clinician.  His clinic, entitled “Basics in Brass,” is designed to offer a simplistic and effective approach to playing a brass instrument.  Steve is an active recruiter and ambassador for community outreach for the organizations and institutions that he is affiliated with.  In March of 2016, Steve co-coordinated and co-hosted a two-day regional trumpet festival at the Eastman School, helping bring the esteemed talents of Mark Gould, Brian Shaw, Bob Malone, and Wayne Tanabe to the greater-Rochester and Eastman communities.  Steve has also served as Choir Director for his chapter of Phi Mu Alpha Sinfonia at the University of Massachusetts (of which he is also a founding brother), and also as inaugural President of the Pioneer Valley Trumpet Guild, an affiliate chapter of the International Trumpet Guild.

Steve’s primary teachers include Paul Sundberg at Williams College (2003-2007), Eric Berlin at the University of Massachusetts Amherst (2007-2012), and currently James Thompson at the Eastman School of Music (2013-2018).  His successes as a student, musician, and person can be directly attributed to the tremendous support of his family, friends, and mentors.