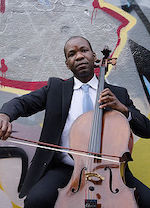 Cellist, Wayne Smith, gave his recital debut at the Kennedy Center in 1996 to critical acclaim. As soloist and chamber musician, he has performed through out the United States, Italy, Germany, Romania, Hungary, Austria, Poland, and China.

He is a member of the Wistaria String Quartet, the Portland Piano Trio and 1200 Horsehairs, a contemporary cello quartet. He is also a frequent performer at Bargemusic in New York City and a core member of the Harlem Chamber Players. He has also appeared with the New Jersey Chamber Music Society, the Manhattan Chamber Players and the National Chamber Orchestra.

Wayne is currently serving on the faculties of Amherst College and the Williston Northampton School. He did his undergraduate studies at the Eastman School of Music and graduate studies at UMass Amherst. His principle teachers include Ardyth Alton, Steven Doane and Astrid Schween.